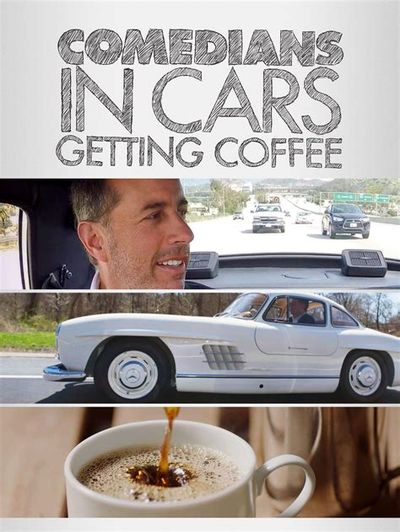 Comedians in Cars Getting Coffee is a TV series starring Jerry Seinfeld, Michael Richards, and Mario Joyner. Jerry Seinfeld is joined by friends for a cup of coffee and a drive in a classic car, sharing stories all along the way.

Jerry picks up Alec Baldwin in a 1974 BMW 3.0 CS coupe, and they drive to their shared hometown of Massapequa, New York, to swap old stories.

Jerry picks up Eddie Murphy in a Porsche Carrera GT for a wide-ranging conversation about Eddie’s career and coming up together in late-’70s New York.

8. Comedy, Sex and the Blue Numbers

Jerry Seinfeld transports Louis C.K. in a 1959 Fiat Jolly to Louie’s boat for some coffee and conversation.

Garry Shandling rides shotgun in a 1979 Porsche 930 as he and Jerry goof on Matthew McConaughey and the Dalai Lama during a trip to Seinfeld’s old New York street set.

6. Mad Man in a Death Machine

Jerry drives his good friend Ricky Gervais in a 1967 Austin-Healey 3000. They have breakfast, including coffee at City Island Diner in City Island NY.

Jerry Seinfeld drives his long-time friend and sometimes collaborator in a 1952 Volkswagon Beetle to John O’Groats in Los Angeles for a hot beverage (not necessarily coffee) and some conversation.

4. I Want Sandwiches, I Want Chicken

Jerry gets coffee with Michael Richards and sees Barry Katz on the way.

2. Just Tell Him You’re the President

President Barack Obama and Jerry Seinfeld take a drive around the White House grounds in a 1963 Chevy Corvette Stingray.

Jerry Seinfeld transports Julia Louis-Dreyfus in a 1964 Aston Martin DB5 before stopping for a coffee.

The Worst Romantic Series ever broadcast...