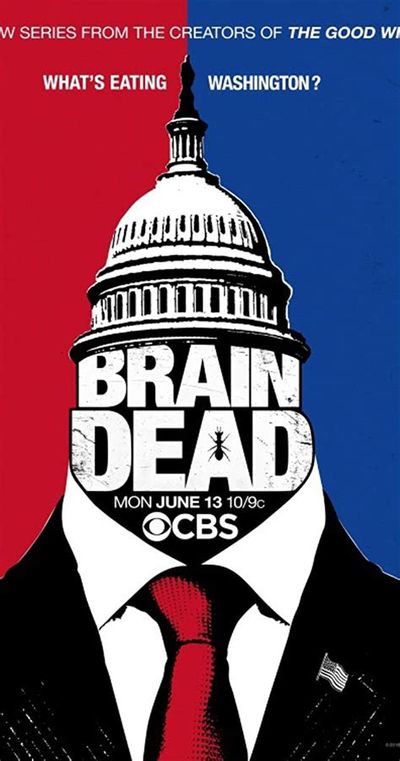 BrainDead is a TV series starring Mary Elizabeth Winstead, Danny Pino, and Aaron Tveit. A government employee discovers that the cause of the tensions between the two political parties is a race of extraterrestrial insects eating…

10. Goring Oxes: How You Can Survive the War on Government Through Five Easy Steps

Agent Onofrio’s investigation of a deadly incident on live TV causes Laurel, Gustav and Rochelle to delve deeper into the bug mystery. Luke tries to hide his affair with Scarlett.

9. Back to Work: A Behind-the-Scenes Look at Congress and How It Gets Things Done (and Often Doesn’t)

Laurel asks her brother, Luke, for his help to get the Centers for Disease Control and Prevention to investigate the bugs, but he insists she first consult Dr. Joanne Alaimo, a leading entomologist, for her perspective on the invasion. Also, Laurel’s relationship with Anthony takes a drastic turn.

8. The Path to War Part One: The Gathering Political Storm

Rochelle and Gustav capture and question a man they suspect is infected by the bugs. Also, Luke and Red face off in a Senate Intelligence meeting about a potential war.

7. The Power of Euphemism: How Torture Became a Matter of Debate in American Politics

Laurel comes under investigation about her potential involvement with the bug infestation. Also, Gustav and Rochelle discover a unique way to communicate with those infected by the bugs.

6. Taking on Water: How Leaks in D.C. Are Discovered and Patched

Senator Red Wheatus hires a special investigator to dig into the Healy family’s financial and personal history. Also, when Gareth learns some sordid details about Laurel’s romantic past, it puts a strain on their budding relationship.

5. Six Points on the New Congressional Budget: The False Dichotomy of Austerity vs. Expansionary Policies

4. Notes Toward a Post-Reagan Theory of Party Alliance, Tribalist, and Loyalty: Past as Prologue

When the Center for Disease Control has its funding temporarily cut, Luke attempts to reach a compromise to have the money reinstated, but Red’s political machinations undermine him at every turn.

3. Talking Points Toward a Wholistic View of Activism in Government: Can the Top Rebel?

When Laurel discovers that a senate bill is not what it appears, she implores Luke to help, leading to a dramatic Senate sit-in. Also, Red and Ella battle for control of the bug agenda, and Laurel questions whether or not she should leave Washington, D.C. for good

2. Wake Up Grassroots: The Nine Virtues of Participatory Democracy, and How We Can Keep America Great by Encouraging an Informed Electorate

Laurel and Rochelle try to persuade Laurel’s friend Abby to get an MRI so they can uncover the real cause of the strange behavior taking over Washington, D.C. Also, Luke attempts to reopen the government through a secret deal with the Republicans.

1. The End of All We Hold Dear: What Happens When Democracies Fail: A Brief Synopsis

Laurel discovers the secret to driving the bugs out of a person’s brain and tests the tactic on her father. Armed with new knowledge, Laurel and Gareth attempt to expel the Queen bug out of Red’s head once and for all. Laurel and Gareth progress in their romantic relationship.