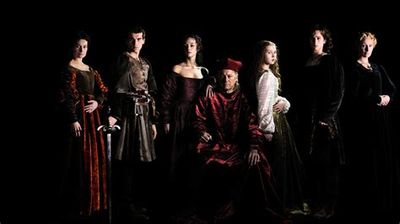 Borgia is a TV series starring Mark Ryder, Isolda Dychauk, and Diarmuid Noyes. Story of the rise and the fall of the Renaissance dynasty.

Cesare awaits an answer to his ultimatum to Florence, while Rodrigo is stricken ill and Lucrezia becomes embroiled in sexual politics.

Bells toll as the rioting has ended temporarily. Cesare returns to Pisa, where he meets in secret with a pregnant Fiametta, fearful of Rodrigo discovering his unborn son.

8. The Time of Sweet Desires

Rodrigo Borgia, Pope Alexander VI, is not yet over the loss of his son, Juan. His powers are threatening to slip from his hands.

7. Wisdom of the Holy Spirit

The Conclave continues, as no single Cardinal has received enough votes to be elected Pope. Rodrigo visits della Porta, hoping to gain his votes, and outlines the consequences of what will happen depending on who is elected Pope — war with Naples or Milan, Rome slaughtered. Rodrigo emphasizes his neutrality on these issues, making him best suited to be elected.

Rodrigo returns from his monastery and makes Lucrezia First Counselor, while Cesare remains on a military campaign to subjugate the rebel provinces.

Alessandro and Cesare visit a Striga to predict Cesare’s future. She foresees five deaths over the course of the summer that will change Cesare’s life. The Borgia, Orsini, Medici and Cibo dine together to celebrate their new alliance: Giovanni de Medici is now a Cardinal, Juan is Duke of Gandia and Maddalena de Medici is married to the Pope’s son, Franceschetto Cibo.

Having learned that his wife died in childbirth, an angry Juan confronts Lucrezia about her role in Maria Enriques’ escape. Lucrezia is devastated, firm in her resolve to remain a nun she visits Lucia to ask how she may be “blessed” with stigmata. Cardinal Carafa reveals the people of Naples have chosen Federigo d’Aragona to be their king.

Rodrigo addresses the Cardinals. Upon receiving a letter of condolence from della Rovere, Rodrigo invites him back to Rome and dismisses Giulia. After Cesare informs him that Juan killed their halfbrother Pedro Luis, Rodrigo sends him back to Valencia. Rodrigo denies Lucrezia’s request to marry Pedro Caldes. He orders her to become a nun and care for Juan’s orphaned children.

2. The Invasion of Rome

As Giulia gives birth, Rodrigo and the remaining Cardinals discuss the state of war. Della Rovere is poised to take over as pope. Switching strategies, Rodrigo gives Charles permission to pass through Rome.

At the French encampment, Djem learns of his son’s murder by his brother, Bajazet. Distraught, he falls ill. Cesare uses the opportunity to escape and informs Lucrezia that d’Este is in a hospital in Rome. Lucrezia goes to visit him, where she learns that he is suffering from the “French Disease.” Heartbroken that he has been with other women, she asks Rodrigo for permission to join the convent.