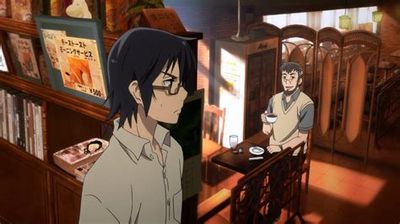 10. Flashing Before My Eyes

A sullen manga artist with special powers becomes immersed in a mystery he once thought was solved. When the unthinkable happens it is up to him to change the course of history.

Satoru has an amazing breakthrough which results in a third chance of sorts. This time he is determined to revamp his game plan and change the course of time.

Satoru follows the only clue left behind by his mother , while it does prove useful Satoru struggles to stay one step ahead of the police.

Satoru accidentally alienates two classmates with one mistake. Later he gets a horrifying look into Kayo’s home life and tries to make her happy after she tells him a sad story about her past.

After learning his efforts were in vain Satoru is transported back to 2006 in the midst of the manhunt for him and ends up placing his closest ally in danger.

Satoru remembers everything and Sensei will have to decide if he has to kill him or if he needs him too much to do it.

Satoru enlists Sachiko to help him invite Kayo out to a local science center. But while they enjoy themselves, Satoru starts having some intense déjà vu, which causes him to worry that he’s trapped in some kind of time loop.

After saving Kayo, Satoru is trying to get close to the next victim that the killer is going to be targeting. As he is going after a lead, new information about the killer is discovered.

Satoru must quickly adjust to resuming his life in the past and finding out just how he can stop his life from being turned upside down.

The killer finds the hiding site, though Kayo luckily manages to avoid being seen. Realizing she’s still in mortal danger, Satoru tries to find a way to save her life, but worries about whether it will actually work.