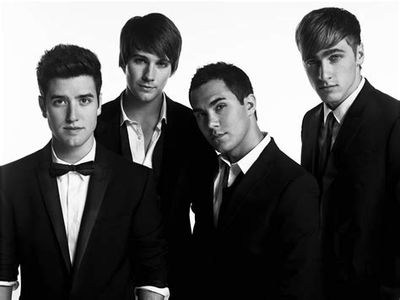 James’ fairy tale romance with a foreign princess quickly becomes an escape mission after he inadvertently proposes marriage, and the guys have to free him before he’s forced into a royal wedding.

On the eve of their first album release Griffin dashes the boy’s music dreams and they return home to Minnesota. Coming to terms with how their world has changed, the guys decide to take control and with Gustavo plan their first big concert.

Kendall and Lucy are about to have their first kiss when her good looking ex-boyfriend Beau shows up to win her back. Griffin recruits Logan and Carlos to help him prepare for corporate espionage.

The boys return from their first worldwide tour and find that being the new kids at the Palm Woods Hotel has some advantages that fame doesn’t.

James’ mom, nicknamed the “Estee Lauder of the Midwest” for her successful cosmetics line, arrives at the Palm Woods to bring James home and groom him to take over the family company.

Its date night at the Palm Woods. James helps Carlos on his date with one of the Jennifers, Kendall joins Lucy’s dinner with her parents, and Logan takes a blind date out so he can spy on Camille’s date with Jett.

The boys from Big Time Rush travel to London for their first international tour and accidentally get involved in a dangerous device capable of destroying the world. Features covers of Beatles’ songs, as well as original tunes.

It’s the final stop on BTR’s World Tour and we go behind the curtain and see all the craziness that occur backstage. Combining real concert footage, we see the guys prepare for the show and deal with backstage drama at the same time.

The four Minnesota hockey-heads fear their career is threatened by a new influx of boy bands from the British Isles.

The boys try to prevent their careers from being ruined by sleazy tabloid media, which proves to be difficult for Kendall when Lucy Stone records a song that seems to be about him.

Best Episodes Of The Real O'Neals

The Best Crime Shows from 2003