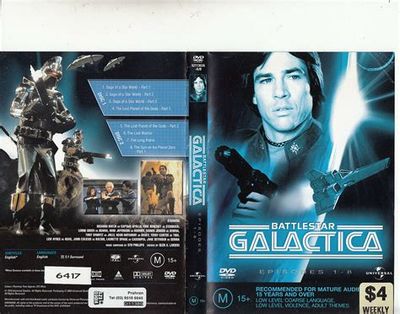 Adama and Cain find common ground when Starbuck returns with footage of the Cylon ship. Roslin negotiates a temporary truce, while Starbuck plans an attack.

A stripped down Galactica attacks the Cylon’s Colony ship in the hopes of rescuing Hera. The meaning of the shared dream in the Opera House on Kobol is revealed. Sam Anders is moved in his Hybrid tank to the CIC in the hopes that he will be able to assist the combatants. Their mission complete, Admiral Adama orders Starbuck to pick a destination – any destination – to which the ship can jump to get out of there. With that, the meaning of the tune and the musical notes are explained. Having successfully jumped, the old Galactica has truly reached the end of it’s life. …

Infuriated that Roslin usurped his command by ordering Starbuck to steal the captured Raider, Adama decides that his only option is to storm Colonial One with marines and terminate her presidency. Starbuck reaches Caprica and finds the Arrow of Apollo in a museum, but she has to go through a copy of Number Six to get it.

The Hybrid keeps jumping the basestar, and Roslin has visions. The three, D’Anna, is un-boxed. Humans and Cylons engage in a battle to destroy the Resurrection Hub. Baltar is badly wounded and Roslin has to decide whether or not to help him.

The group on Caprica is under fire by the Cylons, but suddenly they stop. With only one ship’s votes to be counted, Roslin is way behind in the elections.

The Fleet refuses to cooperate with Cylon engineers and Adama decides to put an end to it. He sends the Quorum a message stating that unless they wish to join Zarek in the cell, they get their people in line. However, Gaeta has already freed Zarek with the help of other would-be-revolutionists. They allow Zarek to leave Galactica on a raptor. He lands on Colonial One and enters a gathering of the Quorum. Meanwhile, Anders gets ambushed and captured. At the CIC, Gaeta cleverly manipulates everyone else until the time is at hand for the revolution to begin.

4. Blood on the Scales

Roslin is on board a raptor en route to the Rebel Cylon Base Star, but Gaeta has ordered to engage and destroy it. The marines have used a stun grenade on Adama and Tigh. Roslin manages to get a wireless transmission out for everyone to hear and learn what Gaeta has done. She and the others barely make it to the Base Star, where she convinces Tory and the other Cylons to use the Fleet as a cover in order to prevent Gaeta from attacking it. She also believes that Adama will be able to save the rest of the Final Four. Temporarily safe, the Rebel Cylons start voting on …

D’Anna demands that the four Cylons in the fleet be sent to the basestar. Only Tory goes, while the remaining three are suddenly drawn to Kara’s Viper by the music. The route to Earth is finally found.

Gallactica meets Pegasus, and Adama’s command is threatened when the captain of Pegasus outranks him. A joyous celebration turns sour at some of the secrets emerging out of the differences of the two crews, and Baltar meets a familiar Cylon prisoner aboard Pegasus.

The attack to rescue everyone on New Caprica begins. The Galactica encounters four rather than the expected two Cylon Basestars. The end appears in sight but they get help from a welcome but unexpected source. On the planet below, Tyrol and Anders lead the attack to free everyone from the prison. Anders finds Starbuck but she won’t leave without Kacey. Her successful return to the Galactica results in mixed emotions. Colonel Tigh must decide what to do about his wife Ellen after she admits to giving the rendezvous coordinates to the Cylons. Hera doesn’t make it off …

Best Episodes Of The Crown