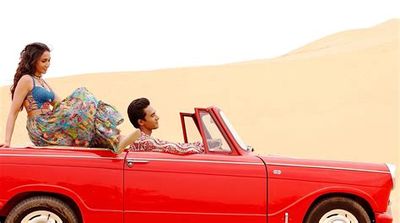 Bandish Bandits is a TV series starring Ritwik Bhowmik, Shreya Chaudhary, and Naseeruddin Shah. Indian classical singer Radhe and pop star Tamanna. Despite their contrasting personalities, the two “set out together on a journey of…

Giving up on his legacy, Panditji takes a vow of silence while Tamanna ends things with Radhe, staying back in Mumbai to figure her life out. Everything seems lost and Radhe is utterly broken, until his gentle mother makes a startling revelation. Under Mohini’s guidance, the family begins to regroup for a final stand against Digvijay at the upcoming Sangeet Samrat ceremony. But some skeletons still remain to tumble out of the closet.

Tensions begin to flare up between Radhe and Tamanna as his popularity grows among fans, making her feel sidelined. Meanwhile, Rajendra discovers his son’s secret and comes to him for help as his creditors tighten the noose. Radhe turns to his free-spirited uncle Devendra, and the trio start organising gigs in order to repay Rajendra’s loan. This takes a toll on Radhe’s training with Panditji, as well as his collaboration with Tamanna. The Bandish Bandits’ second song is finally released, but a tremendous shock is in store for Tamanna.

Risking Panditji’s ire, Radhe agrees to sing with Tamanna in order to help his father and save the family from financial ruin. This is the start of Bandish Bandits and a secret double life for Radhe, where he dangerously juggles the clashing demands of pop and classical music. Attraction grows between the young couple as they begin work on their first song together, and Radhe finds himself falling in love with Tamanna. However, his family has other plans for him.

A nocturnal escapade with Tamanna makes Radhe critically late for his Ganda Bandhan initiation ceremony with Panditji, infuriating his grandfather and jeopardising his musical dream. As Radhe embarks upon a journey of penance to win back his mentor’s trust, he stumbles upon a dire skeleton in his father Rajendra’s closet, which sends his world further into flux.

With her dream torn away, Tamanna goes into depression. Radhe tries to pull her out of it, teaching her to sing live for a final shot at collaborating with her idol, international pop star Queen Eli. Meanwhile, Devendra makes a huge sacrifice for the family. Radhe’s training with Panditji continues, but just as he’s progressing, Digvijay arrives with a bombshell that threatens to ruin everything. At her concert in Mumbai, Tamanna stumbles upon a secret that breaks her spirit.

Utterly intimidated by Digvijay’s tremendous talent, a nervous Radhe nonetheless begins to train under Panditji to sing against his prodigal uncle at the next Sangeet Samrat ceremony. Meanwhile, the Bandish Bandits’ first song releases and is an enormous hit. Unwilling to trouble Radhe any further, Tamanna struggles desperately to create her next song solo. But unbeknownst to both of them, her record label has launched upon a new line of thought.

As the family flounders once again following Digvijay’s latest disclosure, Panditji finally breaks his vow of silence to rise to Mohini’s defence, shedding light on the struggles of her past. The day of the Sangeet Samrat ceremony arrives, and a fierce competition ensues between uncle and nephew. Tamanna flies down for the function, supporting Radhe from the audience. But both joy and sorrow await him as the evening and the season draw to a close.

In the doldrums after having upset both Panditji and Tamanna, Radhe is shaken by an unexpected glimpse into his grandfather’s past when Digvijay, Panditji’s estranged son from an earlier marriage returns to lay claim to the family’s Rathod Gharana. Simultaneously, Radhe tries to navigate the awkwardness of a tense music video shoot and win back Tamanna, who is no longer talking to him after the discovery of his engagement. As he grapples and flounders, Panditji comes to him with a staggering confession.

Dismayed at the marriage arranged for him by his family, Radhe is left angry and confused. Afraid to tell Tamanna, he determines to break it off himself. Meanwhile, his two disparate musical worlds also continue to collide and the strain starts to show as he simultaneously works towards the climax of his first song with Tamanna and his first public performance with Panditji. Things come to a head on both personal and musical fronts at Makar Sankranti, where Panditji also receives an unwelcome visitor.

Radhe Rathod, a young music prodigy, is determined to follow in the footsteps of his grandfather Panditji, a legendary classical singer who has occupied Jodhpur’s most prestigious title of Sangeet Samrat for the last 25 years. Meanwhile, Tamanna Sharma, a viral YouTube pop sensation struggles to produce a new hit single to save her career after the flop of her last song. She discovers Radhe’s talent and urges him to collaborate with her, but pop music is a strict taboo in the Rathod household.

The Worst Adventure TV Series from 1996