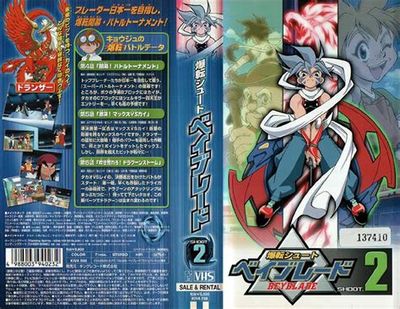 Determined to avenge the All-Starz’ devastating defeat, the White Tigers face Kai in the Tournament. One by one, they fall before the power of Black Dranzer and watch, horrified, as their Bit Beasts are absorbed into Kai’s Beyblade. The Bladebreakers storm the abbey in a desperate attempt to free their teammate. Tyson stumbles into Biovolt’s secret lab and learns the truth about Kai’s past from a gloating Boris. Tyson refuses to give up on his friend until Kai hands over his old Beyblade and tells him to leave. Will the Bladebreakers survive the loss of their most …

After Kai’s first round loss to the Demolition Boys in the World Beyblade Finals, it’s Ray’s turn to take on Bryan in a best-of-three match. Ray learns the hard way that Bryan is a nasty competitor who’ll do anything to win – including putting Ray himself through the ringer. When it’s discovered that Bryan’s attack includes the ability to manipulate air itself into a weapon, Ray faces a troubling realization. To negate Bryan’s fury, he must put his own well being at risk. But Ray’s Bit-Beast Driger has other ideas, and it offers up selfless act of its own.

A mysterious stranger wanders the woods of White Tiger Hills, the headquarters of the White Tiger X team, and although this strange young man performs incredible good deeds, Lee and the rest of the team are suspicious, and tell their leader Ray, all about him. It isn’t long until the entire team meets up with him again, and Ray comes face to face with the stranger’s incredible abilities like leaping, flying and jumping through the air, not to mention Beyblading like a world champion. He calls himself Mystel and amazes Lee and Ray with the mixture of his incredible …

Downtrodden and dejected, the Bladebreakers ask themselves over and over again: “Why would Kai betray us?” Soon enough, however, the boys get a chance to ask him themselves. Summoned by Kai to Beyblade on a frozen lake, the Bladebreakers must not only win to save their Bit Beasts, but must convince Kai that they will always be his teammates. Can they do it…?

It’s the finals of the World Beyblading Championships and the final battle pits Kai against the defending world Champion, Tyson. The fight is incredibly intense and what’s even more amazing, it looks like the two combatants are so evenly matched, there might not be a winner. And that’s exactly what happens! At the end of the battle, Kai and Tyson drop out at the exact same time! Now a dilemma arises. Mr. Dickenson has to make the final decision and he’s leaning toward calling it a tie because he’s afraid that if they continue the battle, someone could get hurt. But …

5. A Knight to Remember!

Enrique and Oliver decide to take our heroes on a dirigible ride to visit Robert’s castle. The reason – Tyson hopes to avenge an earlier loss to Robert that happened onboard the ship coming to Europe. Tyson’s patience, however, is tested when they have to sit and wait for their host who is ‘not to be disturbed.’ So, Tyson decides to find Robert on his own and ends up getting lost in the medieval castles many eerie secret passages. Finally everyone converges in the room where Robert is playing chess against Johnny and it’s here where Tyson throws down the gauntlet and …

After a devastating match puts Ray in the hospital, Tyson trains his heart out to prepare for his battle against Tala, leader of the Demolition Boys. What Tyson doesn’t know is that Tala has become one of Boris’ weird experiments, uploaded with dangerous Biovolt technology. Meanwhile, Max’s parents work together to come up with an improved Beyblade that can combat the existing threat of the Demolition Boys’ prowess. Can it even come close to competing against…Cyber-Tala?

It’s the finals of the World Beyblading Championships and Tyson is about to defend his title against Zeo who fights with the extra power of the Bit Beasts he’s captured. But something strange is revealed at the start of the battle – turns out Zeo isn’t human after all! In fact, he’s a robot Zagart created to replace his real son who died in a tragic accident. And according to the evil doctor, if Zeo can capture Tyson’s Dragoon, then by using all the Sacred Bit Beasts powers, Zeo will be turned into a real boy! The battle rages on and Zeo seems to be the aggressor. …

Now that Kai is finally loyal to the ‘Bladebreakers,’ he returns the Black Dranzer to Boris, doing severe damage to the enemy headquarters in the process. Voltaire orders the operation to proceed, and Boris brings in the Demolition Boys to get the job done. It is revealed that BioVolt is creating a breed of powerful, savage, Bit-Beasts that are designed for War…and the plan is to use them to take over the entire World. The Demolition Boys attack the BBA bus, and Max bravely battles to save his friends. Unfortunately he loses his Bit-Beast, Draciel, in the process…

The final match between the G Revolutions and the BEGA Bladers has arrived. Tyson prepares for the contest, unsure of whom he will ultimately face. It isn’t until he steps onto the stadium floor when he discovers that he will go face to face, against Brooklyn himself. Brooklyn shows off his incredible powers immediately, stunning both teams on either side of the Beystadium. But no one has any idea of the true extent of Brooklyn’s powers until he creates a wormhole to another dimension, creating an empty shell, carbon copy of the real world! The freak out continues as …

The Worst Family TV Shows from 2018