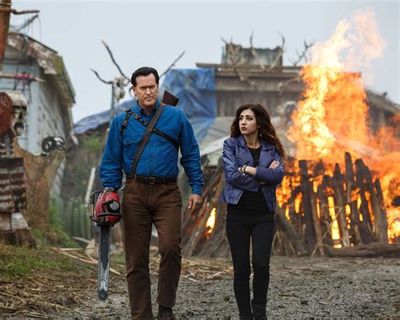 Ash’s bond with his daughter strengthens as more Knights of Sumeria join Pablo and him to defeat evil; Kelly decides to go after Ruby while Ash, team, and the knights enter the rift and face a battle of their own.

Ruby’s house of horrors reveals her master plan as well as a little bundle of joy that terrorizes Ash; Pablo’s Brujo ties bring him back to the path he needs to take.

Ruby gives birth to a form of evil and disguises herself to bond with Brandy. Kelly returns with a friend who is leading the search for The One to defeat The Dark One, while Ash realizes evil is out to get his daughter.

Local teens raise hell when they steal the Delta from Brock’s house. Ash and his best buddy Chet devise a plan to throw a party at the bar, lure the thieves in, and get the Delta and the Necronomicon back.

6. The Killer of Killers

Thanks to his drug-induced vision, Ash knows what to do with the Necronomicon. Pablo and Kelly notice something ominous. Ash promises to visit Lem, but Fisher shows up for an almighty showdown with her former boss.

Pablo’s grasp on reality is tested when Ruby reveals the Necronomicon has gifted him premonitions. Meanwhile, Ash and Kelly discover Brock’s date might not be the warm body he’s banking on.

Ash returns to the classic forbidden place where it all began.

Ruby, Kelly and Pablo go to look for Ash and Baal in an abandoned asylum and encounter some crazy characters. They are all players in Baal’s attempt to break Ash and find the Necronomicon. But did his plan work?

1. The Mettle of Man

Elk Grove undergoes a major battle that takes place on the streets, Ash rides high in a military tank, speeding across shaky, post-apocalyptic Elk Grove. Ash fights the biggest battle of them all – a sixty foot tall Kandarian demon.

The Worst TV Thrillers from 2011