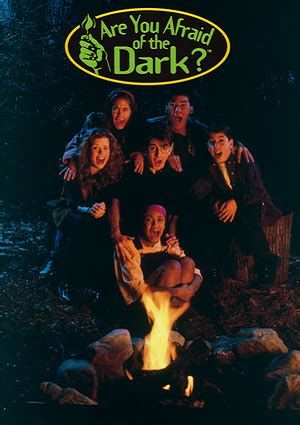 Are You Afraid of the Dark? is a TV series starring Ross Hull, Daniel DeSanto, and Raine Pare-Coull. A group of kids get together in the woods, and tell ghost stories.

10. The Tale of the Magician’s Assistant

A boy becomes the new assistant to an elderly stage magician, but soon gets into great trouble after he steals the magician’s magic wand.

9. The Tale of a Door Unlocked

Sardo sells a magic door to a teenage boy where once he opens the door, the future happens in front of him.

8. The Tale of the Quiet Librarian

A library is haunted by the ghost of a former librarian who dislikes noisy children.

7. The Tale of the Dream Machine

An aspiring writer finds a typewriter that makes whatever is written about somebody come true.

6. The Tale of the Super Specs

Weeds, a prankster, buys his girlfriend Marybeth a pair of super spec glasses as part of his April’s Fool Day collection. Once she puts on the glasses, strange figures appear and can’t be explained.

5. The Tale of the Water Demons

Shawn McKenzie visits his relatives and works in a job for the summer where him and his cousin deliver groceries to an old man’s house and see why he’s very odd.

Stacey and her Mom move into a new apartment only to find that the apartment next door to theirs is occupied by a kindly old woman who’s been dead for ten years.

3. The Tale of the Dead Man’s Float

Zeke and Clorice find an abandoned swimming pool at their school where a secret is contained.

2. The Tale of the Curious Camera

A camera brings misfortune to anything or anyone it takes a picture of.

1. The Tale of the Dream Girl

A young man finds a ring in his locker only to discover he is ignored by those around him except his sister and an unknown girl.

The Worst Action Shows from 1993