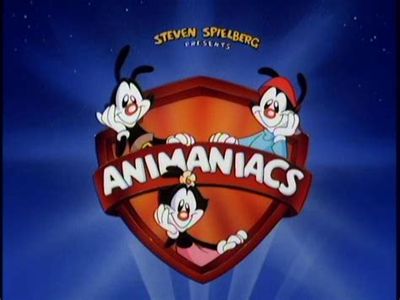 The Warners arrive in Anvilania to take their rightful place as rulers – and annoyers.

In “Hooray For North Hollywood” – Part II, Yakko, Wakko and Dot sneak into a big Hollywood fundraiser, still focused on finding a buyer for their 800-page script.

7. The Sound of Warners/Yabba Dabba Boo

The Warner siblings are confounded by an ever-so-cheerful governess in “The Sound of Warners”, a musical parody of “The Sound of Music.” Later, in “Yabba Dabba Boo”, famous screenwriter Larry “Gelboo” rewrites a script.

The Warners wreak havoc at the movie theatre in a black and white cartoon from the 1930s. Then, Wakko has a “Potty Emergency” as he races against time and nature to find a bathroom.

The Warners help Albert Einstein discover the theory of relativity in “Cookies For Einstein.” Then, to finance his latest scheme to overthrow the world, The Brain becomes a contestant on a game show, where he hopes to “Win Big.” Finally in an upbeat ditty, Yakko sings the name of every country in the world (“Yakko’s World”).

Greek playwright Aristotle tries to win cash and prizes on “You Risk Your Life,” a game show hosted by Yakko.

The Warners sing “I’m Mad,” a song about sibling rivalry. Then, Goodfeathers Pesto and Squit try to cheer up “Bad Mood Bobby.” In “Katie Ka-Boom: The Blemish,” Katie goes berserk when she discovers a pimple on her face. And finally, the Warner siblings cry “Fake” when they attend a wrestling match with Dr. Scratchansniff.

“Lookit The Fuzzy Heads,” exclaims “Tiny Toons” star Elmyra when she visits “Animaniacs.” Elmyra loves the Warner siblings in her own overbearing, and sometimes painful, fashion. Slappy Squirrel learns that there’s “No Face Like Home” when she undergoes plastic surgery and discovers that the doctor is her old nemesis, Walter Wolf.

First, in “Video Review,” the Warners run amok in a video store late at night. Then, in another effort to overthrow the world, Pinky and The Brain use H.G. Wells’ time machine to create an era “When Mice Ruled the Earth.”