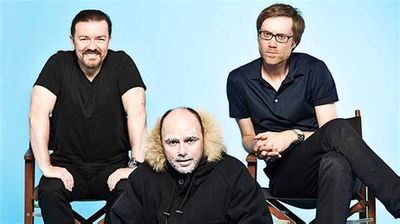 A man, who sees the world as a photograph, is forced by his friends Ricky and Steve to go out to see the seven wonders of the world. What he does not know, is that he will be getting pranked the whole time.

A commentary track for An Idiot Abroad: The Short Way Around: China (2012).

Karl travels to Australia to swim with dolphins, but the trip doesn’t turn out as expected. On the way, he stops in Thailand, where he meets some ladyboys and gets attacked by monkeys. In Australia, he swims with sharks instead of dolphins.

Karl visits Japan where he trains to be a sumo wrestler, stays in a capsule hotel, decides to invent something, eats fermented Japanese fish, studies with a Zen Buddhist master, participates in a Japanese tea ceremony, and climbs Mt. Fuji.

Karl sets off to Alaska to go on a whale-watching cruise. Before heading out to sea, he journeys across a frozen landscape on foot, by snowmobile, and by dog sled. The cruise aboard a working deep-sea fishing boat proves difficult for Karl.

Karl, now back in Britain after his “seven wonders” trips, sits down with Ricky and Stephen to discuss the experience. Stephen is confused by Karl’s seemingly contradictory statements about not wanting to miss the many sights and sounds on his travels, but also being overly annoyed by them. Many of those sights center on food. Many of the situations Karl experienced he classifies as false fun, which he does not like in principle. They talk about the people Karl met. Karl tells them about what he thinks he’s learned from these travels. They discuss the fact that many …

Karl takes the Trans-Siberian Express from Moscow to China. On the trip, he experiences a Russian steam room, undergoes Cosmonaut training, meets a magnetic man, gets buried alive, competes in a wrestling match, and visits a dwarf village.

Upon Karl’s arrival in Delhi, his senses are overwhelmed, and not in a good way, which is not helped by his sleeping arrangements. He trusts on day two of his trip, he will feel better if only because things can’t get worse. He is scheduled for an eight hour overnight bus ride to the Kumbh Mela Festival, the largest religious festival in the world, which he is not looking forward to since he is not a religious person and doesn’t understand the attraction of religion. But the day ends up being a “colorful” one in an unexpected way, which in part is the reason for him …

Ricky and Stephen send Karl on his first trip to perhaps Karl’s worst nightmare: China. The reason that Karl is so afraid of this locale is that what he is exposed to of Chinese culture – that being solely his local Chinatown – he does not understand at all, and he is afraid that if he gets a taste for some exotic Chinese food, such as toad, he won’t be able to find it when he gets back home. On his itinerary is Beijing, the Great Wall of China (which he ends up believing is not great but a sham), and Shanhaiguan. Stephen also surprises him with some excursions, …

The Best Action Shows from 2018