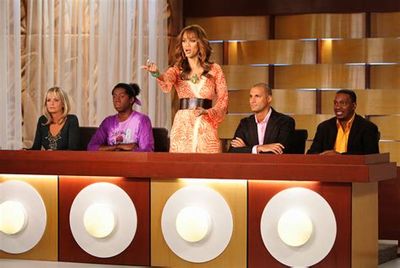 10. The Guy Who Wears Heels

Models test their acting chops to compete for a walk-on role on a scripted television series. A frozen photo shoot turns icy after hurtful comments are overheard at the house.

During this week’s challenge the girls head over to The Grammy Museum in Los Angeles where Neil Portman, President and CEO of The Recording Academy, reveals that one of them will be chosen to be a “Grammy Girl” during The 2011 Grammy Awards. During this week’s photo shoot the models portray an iconic fashion designer for photographer Francesco Carrozzini, who is also this week’s guest judge

The All-Stars are asked to produce a song about their lives and then perform in a music video directed by Game.

7. The Girl Who Gets Punked

The models get tested at a commercial shoot to do ridiculous requests with a fake director played by comedian Reggie Watts.

6. The Girl Who Wants It So Bad

Upon arriving in New York city, the 10 finalists discover that the lifestyle of a supermodel is not what they expected as each competitor is weighed, waxed, and whisked off to their first-ever bikini photo shoot, a top a NYC high-rise in wind chilling weather. Ken Mok. Fashion photographer Douglas Bizzaro is this week’s guest judge. Later, tensions rise as the 10 women discover that their spiritual beliefs divide the penthouse they all share. Meanwhile, the announcement of the first elimination is feared.

5. America’s Next Top Model Is…

In the cycle 11 finale, the three finalists put their Top Model experience to the test when they shoot their final CoverGirl commercial and print ad.

The models bare it all in a nude photoshoot unlike ever before. Later, the contestants create an anti-bullying PSA for the National Crime Prevention Council (NCPC) which triggers deep, dark secrets from each of the models’ pasts.

Thirty three semi-finalists compete for a chance to be Tyra’s friend but only 13 will make it into the Top Model loft in New York City. The lucky finalists are shocked when special guest Perez Hilton reveals their first challenge is to undergo makeovers.

2. The Guy or Girl Who Came Back

When the guys and girls visit modeling agencies, they are paired up with a previously eliminated model, who may earn the chance to come back in the competition.

A group of quarter-finalists are handpicked out of hundreds of applicants to do an immediate runway show in a ball organized to formally open the show. After this, the quarter-finalists are brought in for some face-to-face interviews with the judges. The four judges (Tyra Banks, Rob Evans, Kelly Cutrone, and Johnny Wujek) then decide on 26 semi-finalists. Results of the cut were revealed by Bryanboy at the location of the house which the finalists will remain through the competition. In a surprise visit, Tyra Banks and Rob Evans come to see the semi-finalists to give …

The Best Family TV Shows from 2001