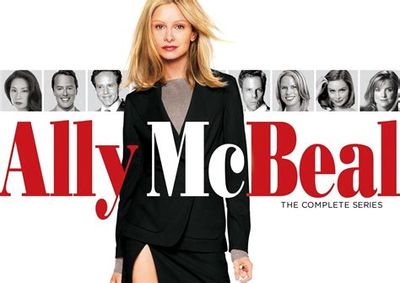 Renee and Ally are throwing a party and inviting everybody from Cage & Fish, even Nelle. Elaine’s boyfriend George was fired from his job and Ally is representing him in court. When she finds herself in jail for wearing short skirts, the entire firm comes to her defense and Ally starts recognizing who her true friends are.

Nelle introduces the firm to Ling Woo, her main client. They are suing a sex-talk radio host with a ridiculous lawsuit, but it’s crazier that she might actually win and bring publicity to the firm. Richard’s happy, but Ally just might find a way to undermine their own case. John is defending a restaurant who served horse meat, but his love for Mr. Ed has gotten him depressed, and tongue-tied – when it comes to Nelle.

A widowed Reverend who no longer believes in God believes that Ally has been brought to him by fate and he hires her as his lawyer which brings Ally back to a former client. John is helping a man sue his town for cancelling Christmas, but the case hits a holiday nerve and John has become disappointed in mankind. Elaine is preparing a Christmas party duet with Glenn but Jenny is having nothing of it and is willing to fight over her man.

Nelle hires John to defend her father when he’s been fired for believing he’s Santa Claus. The case is going to need some magic since he really does believe he’s Santa. Larry’s ex-girlfriend and the mother of his child, Jamie, shows up in his office, and Ally tries to deny that she’s jealous. When Jamie then gets invited to the office Christmas party, Ally no longer feels like partaking in the festivities.

Ally is dating a father and son, and then gets herself sued by a puritanical classmate over fallacious snide remarks. She hires Larry as her lawyer but becomes irrational upon learning that he’s married, and then becomes even more irrational when she sees him dating Nelle. Mark is having a hard time dating Cindy because of everyone’s phobia over his girlfriend’s genitalia.

The firm has a new case where they up against a formidable young lawyer named Lolita (‘Christina Ricci’). Concerned about her reputation, Nelle and Richard are off to a Mexican restaurant to retrieve their own Biscuit, John Cage. Ally is attempting to hire a top billing lawyer Todd (Matthew Perry) but she’s concerned about the lack of action in her and Victor’s relationship and has decided that Todd is attracted to her.

When Maddie suffers a nervous breakdown, Ally decides to move to New York, leading to tearful goodbyes with her friends; Fish and Liza decide to wed.

With Larry gone, Richard assigns Ally to a case. A high school boy is seeking a court order to force a girl to take him to the prom. It’s a long shot, but Ally wants to help the boy out, and she also thinks that Larry is the opposing lawyer. Richard has just hired Jane as his new secretary, but when she points out to him that everybody in the office is cold, he is sad and with John’s help, decide that drastic measures need to be taken.

Billy is experiencing hallucinations, he goes to a doctor and finds out his has a brain tumor. It’s benign, so they plan on removing it in a few days, after Billy wraps up his current case. During his summation, Billy collapses and is rushed to the hospital. Ally goes back to the firm, and informs everyone of Billy’s death. Nell breaks up with Cage.

The Worst Laugh Out Loud TV Shows from 1982